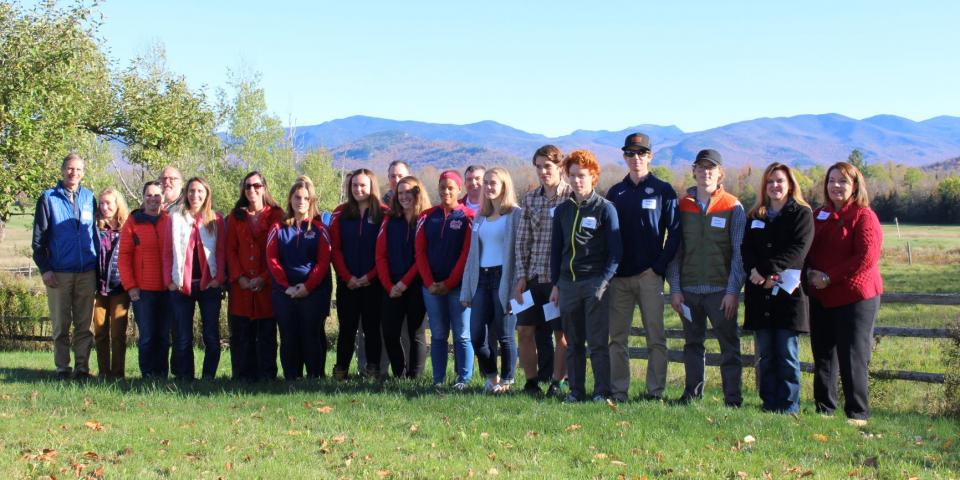 LAKE PLACID — The Uihlein-Ironman Sports Fund, a component fund of Adirondack Foundation, awarded $41,650 in grants this year to 17 athletes and nine organizations in the Tri-Lakes region.

The awards were handed out at a ceremony for recipients and their families and friends on October 14 at Heaven Hill Farm in Lake Placid.

Brothers Beckett and Van Ledger accepted their awards in person, joined by parents and extended family. Funding will help Beckett with travel expenses as he competes in Nordic combined (ski jumping and Nordic skiing) for the U.S. Junior National Team with the goal of earning enough points this season to qualify for the Senior World Championships. Van will use his funding to travel to Utah for the Youth and Jr. World Competition Trials in biathlon, with hopes of traveling to Slovakia to compete internationally.

“Without this support, I would not be where I am today,” said Esther Munoz via a video she recorded for the ceremony from the Utah Olympic Oval in Salt Lake City. Munoz made the Jr. World Speedskating Team in 2016 and is gearing up for World Cup trials this year.

“This sports fund really changes people’s lives in the best of ways. Last winter when I qualified for the U18 [under 18] Scandinavian trip, it was incredible and will drive me this winter to again try to race overseas,” said Nordic skier Scott Schulz, in an email sent from Sun Valley, Idaho, where he is training. His brother, Karl, also received funding to support Nordic ski competition while studying at University of Vermont.

“This money goes a long way in Tupper Lake,” said Patti Littlefield, town Supervisor, who accepted the award on behalf of the Tupper Lake Youth Nordic Ski Development Club, which has nearly tripled in number of participants since its beginnings in 2008.

The complete list of individual grant recipients and their respective sport is as follows:

“Henry Uihlein’s legacy is one of supporting athletes and athletic organizations from the greater Lake Placid area,” said John D. Leekley, Jr., chairman of the Uihlein Foundation. “We’re proud to continue that legacy to this day, as his generosity continues supporting current and future Olympians.”

“Community support to involve youth in sports is simply part of the DNA of this area. These local athletes are driven by ambitious goals – and a source of inspiration for all of us at Ironman,” said Greg Borzilleri, Ironman Lake Placid race director.

Uihlein-Ironman Sports Fund was established at Adirondack Foundation in 2004 by the Henry Uihlein II and Mildred A. Uihlein Foundation and World Triathlon Corporation. It supports local athletes who aspire to compete on the international stage, as well as community organizations that promote participation in life-long summer and winter sports. Grants are recommended annually by a committee of local residents and representatives from the sponsoring organizations. To date, the fund has awarded $406,823 in grants to 77 athletes, including 11 who have competed in the Olympics, and 26 community organizations.